Across the UK, salaries can vary significantly between roles, organisations, industry sectors and regions. Among regions in the UK, the types of jobs available, number of jobs available, the industries in which the jobs are available within and the salaries paid are very different, and as such, so are the average salaries.
Based on data from positions we have placed and advertised in the last 12 months* we have collated average salaries based on regions in the UK. These averages are indicative of the salary you might expect within your region though will vary according to your personal experience, qualifications and unique skill sets.
For the most accurate average for your specific role, use our Salary Comparison Tool to benchmark your salary against the average salary for your job title by profession and region. Alternatively, contact one of our specialist consultants for a tailored assessment and estimate of what you could expect in the market today. 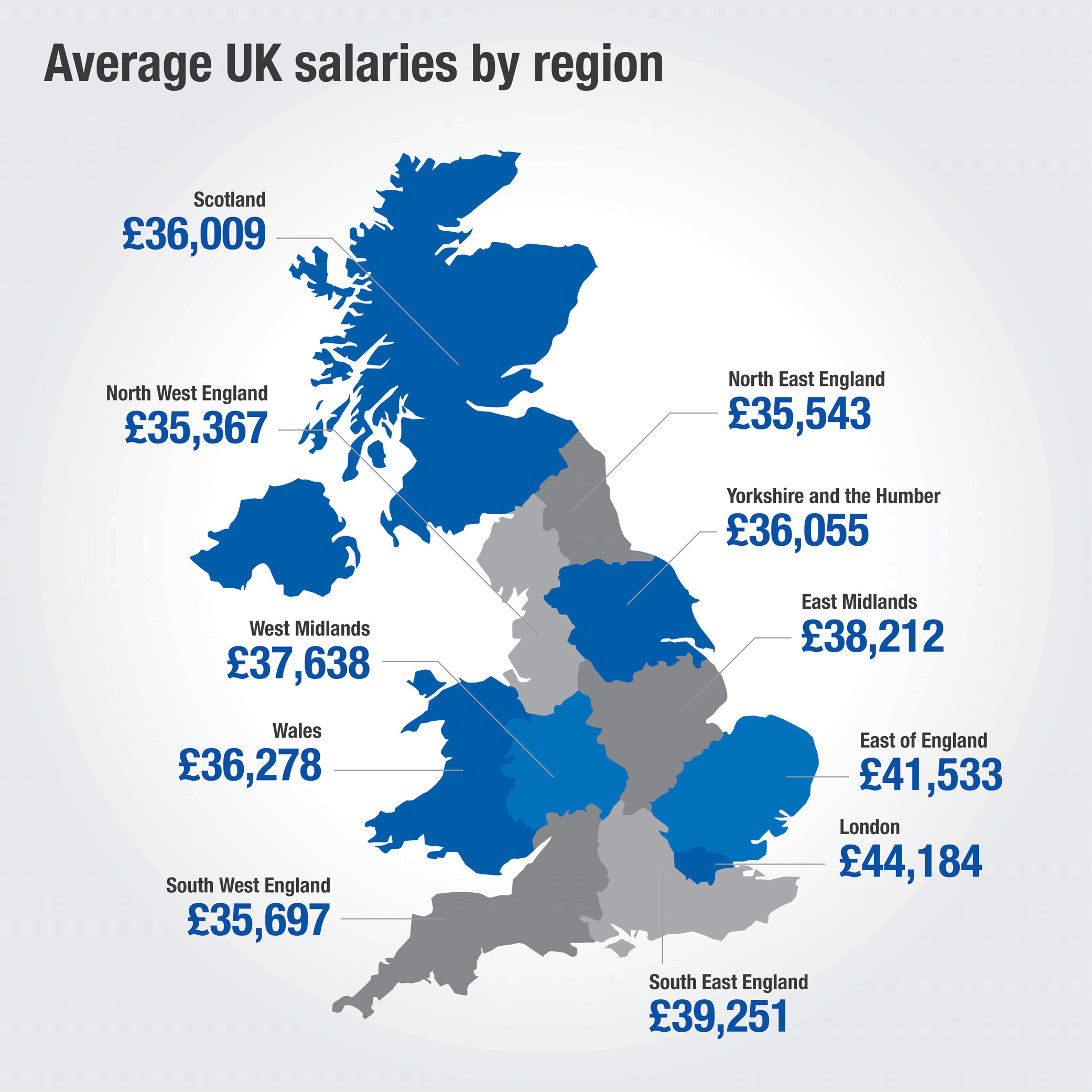 We recruit permanent, temporary, contract and interim opportunities, typically from second/third job levels upward. Businesses we work with range from SMEs to global blue-chip organisations and these average salaries are directly reflected by the level of positions that we have advertised or placed candidates.

The fastest growing economy outside London and the South East, the average salary within the East Midlands, across all industry sectors, is £38,212.

The third highest paying UK region, in areas that fall within the East of England the average salary is £41,533.

London is the capital of both England and the UK, home to over 8m people and an attractive marketplace for professionals not only from within the UK but right across the globe. In London, it is well-known that salaries are typically much higher as the cost of living is higher than in the rest of the UK. Based on this and from our data captured over the past 12 months, the average salary in London is £44,184.

In North East England, the average salary across industries is £35,543.

In the North West, professionals earn an average salary of £35,367.

The average salary in Scotland, including major cities Glasgow, Edinburgh and Aberdeen, is £36,009.

Second only to London in terms of economy and remuneration, in South East England the average salary is £39,251.

The average salary in Wales across all industry sectors is £36,278.

Yorkshire and the Humber

In Yorkshire and the Humber, the average salary across industry sectors is £36,055.

These regional average salaries have been calculated from the following industries and business sectors:

If you would like to discuss what salary you might expect within your specific region and industry sector please get in touch with one of our specialist consultants today.
For a benchmark of the average salary in your role use our Salary Comparison Tool to compare your current pay by job title, profession, industry sector and region.
* Most recent data update: 31st March 2018.

Simplify your job search by downloading our new App

Search for vacancies, submit your CV, browse through our career advice and more.

Are you looking for a new role?

Expert advice on everything from interview tips to salary negotiation skills.