Every job search has its highs and lows so we’ve plotted out last year’s job application and competition peaks and troughs to reveal when you should apply in 2017.

For many people, 2016 was a year of ups and downs and arguably the same can be said for the UK job market. Indeed, as 2017 looks set to herald upheaval – Brexit (whether ‘hard’ or ‘soft’) and a new US president just for starters – many of us will begin to seek change; maybe a new job, or potentially a different career altogether. But when is the best time to start your search?

Following the hubbub of Christmas, the first month of the year sees a swarm of businesses and job hunters looking to respectively progress their growth plans and careers. In fact, according to Jobsite, over four in ten Brits (42%) look for a new job in January.

Specialist recruitment company PageGroup has taken a look back at its UK job advertisement and application data over the past year (January to December 2016) to map out the highs and lows of the job search to find out when is the best time to apply in 2017 and when others are most likely to be applying. Because, if there’s one thing we’ve learned from 2016, timing is everything. 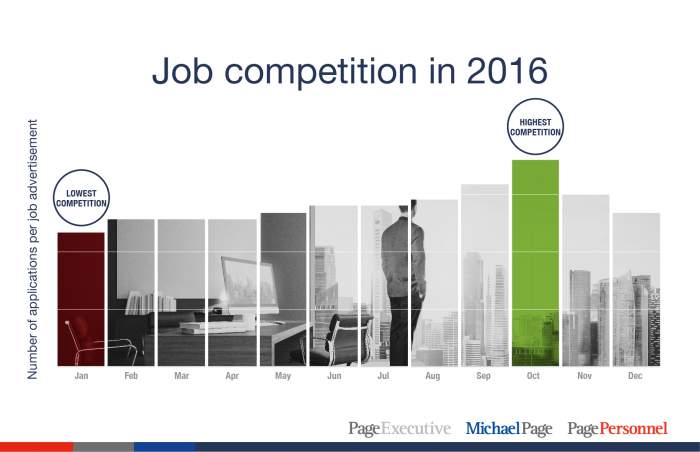 January is a time for reflecting on the year that’s passed, making resolutions and (sometimes reluctantly) signing up to the gym. And whether you like it or not, year after year, the cliché ‘new year, new me’ continues to hold true.

But while 7 January [1] is known as the day people look for a job more than any other in the year, you might be surprised to learn that our PageGroup 2016 job advertisement and application data reveals that competition for jobs is actually at its annual lowest in January (the ratio of people applying for jobs to the number of advertisements). That’s not because there are the lowest number of available jobs; it simply means that proportionately less people are submitting applications. Potentially a case of new year window shopping, as opposed to genuine intention to change jobs.

Despite candidates’ hesitancy, employers are certainly taking advantage of the new-year opportunity. “January is one of the most popular months to hire” says Chris Proctor, Managing Consultant, Finance, Michael Page. “Employers are back at work and keen to hire for both newly created roles and replacements for employees who left before Christmas. If you are interested in new opportunities January is certainly a good time to apply.” 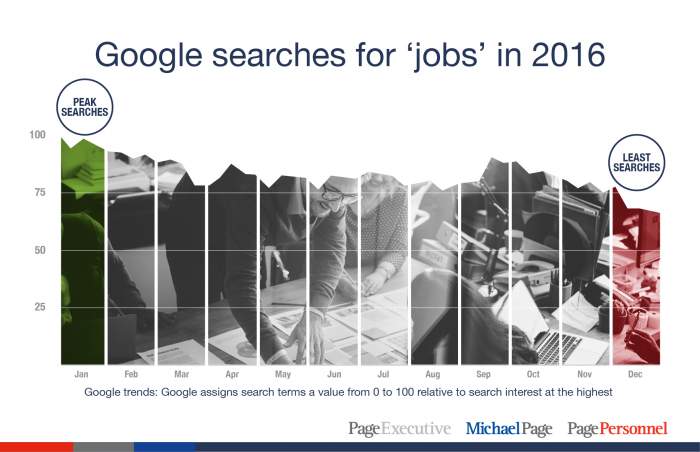 This ‘browsing not buying’ behaviour is evident in search engine activity too: Google searches for ‘jobs’ were at their 2016 peak in January, achieving the highest possible score of 100.[2]  So while people are obviously looking or searching for jobs, they’re not necessarily applying.

When we add in data from our partner job board, totaljobs, who see competition increase from January to February (rising by 12.5% between the two months), it’s clear that acting fast in January could pay dividends. [3]

A job search of two halves: from happy new year to Halloween

While the start of a new year might be hailed as the time to find a new job, if January isn’t the right time for you to consider a career change there is also opportunity to be had later in the year.

So if you’re not sure where or when to start your job search, it might help to know that generally, the first half of the year has lower comparative competition rates for roles than the last half of the year. [4]  Our data showed 14% more applications per job during July to December compared to January to June. That’s more people going up against you for that dream role if you hold off until the second half of the year.

Using 2016 trends to forecast ahead in 2017, we can expect competition to be at its highest in October – with October 2016 competition levels coming in at 28% above the January to June average. This autumn peak is clear in totaljobs’ historical data too, which shows that the number of adverts on the job board are at their highest in September and October, with October again being the most competitive month of the year. [5] 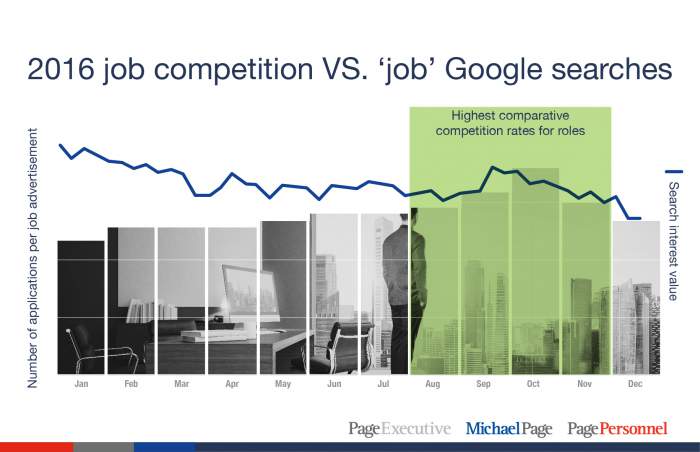 When we then consider that the majority of UK university students graduate in the summer months and that 2 to 8 October 2016 saw Google searches for ‘grad jobs’ reach peak popularity, it’s no wonder that October is a busy time for job applications. When applying at this time of the year, standing out from the competition is critical to success. “As a candidate, you should be able to translate your experience into competencies,” says Nina Buttle, Business Manager, Financial Services, Page Executive. “For instance, in what situation do I turn to a particular skill and can I think of a real world example that demonstrates it?”

Don’t sunbathe on the job hunt

While competition is arguably higher in the second half of the year, there is a noticeable dip in both the number of job advertisements and applicants from May to July. In July 2016, for instance, our data showed the lowest number of live job advertisements and second lowest number of applications in the year. That said, while it’s arguably a quieter time in the recruitment cycle, it still has untapped potential for those willing to prioritise career progression over a summer holiday. Data from totaljobs reveals that from 2014 to 2016, competition for roles was lower in the summer months.

Following the summer slump the number of job applications picks up as of August 2016, with reasonably consistent job postings and proportional competition throughout this four month period.

The noticeable spike in applications in April and May 2016 could be a knee-jerk reaction to bonus rewards, especially within UK finance and banking jobs. “The majority of candidates in banking and finance wait for bonuses [if applicable] and then start their search” says Vanessa Rohr, Senior Manager, Financial Services, Michael Page. “This means that March, April and May will be the months where the most opportunities are advertised – and competition is high.” Banking applications, for instance, increased by 19% between March and April, compared to the legal sector which stayed consistent. This cause and effect becomes even more probable when we consider that the ONS 2016 bonus data shows that the majority of large bonuses in the financial and insurance industries are paid between December to March each year (often known as “bonus season”), and that in 2016 53.3% of all bonus payments were paid within this period.

Now that you can carefully weigh up the competition, how do you go about standing out? Our recruitment consultants gave us their top tips for candidates applying to jobs in 2017 from January all the way through to December. The number one thing they look for in candidate job applications? A strong CV. “It sounds obvious but check your CV describes what you have done and what sets you apart from other applicants” says Graham Rowe, Senior Consultant, Technology, Michael Page. “Rather than just writing a list of previous job descriptions or keywords that sound good.”

Once you’re passed the application hurdle, don’t forget to prepare thoroughly for the interview process. “It’s about you, but it’s also about the company,” says Ben Carr, Operating Director, Procurement & Supply Chain, Michael Page. “Do your research, and go to interviews armed with one or two questions for the interviewer so it’s not a one-way conversation,” he adds.

The job search may be full of ups and downs, but there are opportunities available throughout the year and employers who are eagerly awaiting applicants. For more tips on getting ahead of the crowd, head to our advice centre.

[2] Google Trends: Google assigns search terms a value from 0 to 100 relative to search interest at the highest point, and on the week commencing 3 January 2016, searches were at peak popularity for the year.

[4] Based on PageGroup 2016 job advertisement and application data

Employee benefits: are you underestimating their value?
by Michael Page
Read article