Interview with Dino Burbidge, director of innovation and technology at WCRS 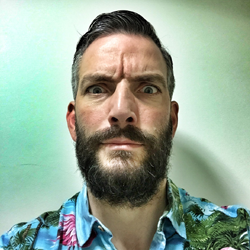 Katie Self at Michael Page Digital placed Dino Burbidge at WCRS as director of innovation and technology in June 2014. She recently spoke to him about his career journey, working at WCRS and the future of the advertising industry.
Dino has been working in the digital industry for 20 years. Before CD-Roms were invented, he used 12" laserdiscs controlled via an RS232 port to make interactive video exhibits for world expos. He’s done video walls, QTVR building explorers, commercial kids CD-ROMs (including Pingu and Teletubbies), coded multi-player games and pinball physics engines, created animations for the Queen, music for EMI, invented cartoon characters, created islands on Google Earth, launched Facebook and iPhone apps and had 250k views on Youtube. He even art directed Tim Burton!

1. What initially attracted you to advertising?

It was more a case of advertising creeping up on me rather than me actively choosing advertising. I've worked in a lot of flavours of the industry from video games, animation, broadcast tv, consumer products, kids content, digital marketing and movies. All of them had some element of advertising at their core.

2.  What are your career highlights? And why?

They're a little eclectic. Meeting the Queen at the reopening of the BBC Broadcasting House. Coding a pinball physics engine from scratch when a freelancer let us down. Spending a day in a cash machine with Jenson Button. Seeing an ad I'd worked on on the Piccadilly jumbo screens. But maybe my favourite is having a kid send in some fan art based on a cartoon I'd created and was running in Toxic Magazine.

3.  If you weren’t doing this job, what would you like to do?

I'd probably be teaching kids how to do dangerous stuff in the great outdoors. The world needs more of that. Or I’d be a game keeper.

4.  What jobs did you have during school/higher education/university? How did they prepare you for working life?

I had two jobs. One was really dull; packing medical supplies in a distribution warehouse. It paid my uni bills and taught me respect for grafting hard for little pay (£3.30 an hour). My other job was really part of my degree. We had to do nine months in industry to qualify. I worked at the most perfect company I could ever have imagined; Media Projects International in Camden (now long gone). It was a true pioneer of multimedia when things like laserdiscs and the internet were just getting going. I credit that job with preparing me for my entire career.

5.  Who are your career heroes? And why?

The MD and CD of Media Projects International, Rosalie Vicars Harris and Malcolm Lewis. As a husband and wife team, they had all the quirks of a married couple but were two of the most dedicated, professional and inspirational people I think I've ever worked with. They even gave me a roof over my head. It's a goal in my professional life to be in the position to repay the favour to someone else.

6. What’s the best advice you have been given?

"If you're the smartest person in the room, you're in the wrong room."

7. Why did you choose the role at WCRS?

Three things. Firstly, I hadn't worked in a 'telly ad' agency before, so that was a great challenge. Secondly, I could see the solution to the problem pretty clearly and just wanted to get stuck in. And lastly, the people were amazing. Work is a really important part of my life and spending all day with genuinely caring and professional people is important.

8. What does an average day at work look like for you?

It's a mix of three things really. Most of the time is spent with creative and account teams, helping grow the ideas into something that goes beyond 'telly, print and radio'. It's a mix of meetings or folk swinging by and asking for input. Then there's research and development. It's an important investment WCRS have made and allows us to create proactive demos and investigate new technologies before we use them on client projects. The rest of the time is spent running the creative technology department and trying to improve the overall digital and creative process for the entire agency.

9.  What’s the most rewarding thing about working at WCRS?

Sounds rather clichéd but it’s when you see the work out in the real world. The teams put in so much hard work to create perfection, it's nice to see it live, making an impact.

10. How does the company’s mantra/mission statement translate into day-to-day life?

Our company-wide mission statements don't really change but interestingly, we have guest mantras that help guide us towards more tactical, short-term goals. We never settle for anything other than the highest quality, so "Good to Great" is a good example of a current mantra. It's how we constantly question our own work and share ideas. We even have an email list named after it where people can post things to inspire others. Good is ok. But how can it be truly great?

11. What was your favourite day at work?

Spending a day, sat in a fake ATM machine in Windsor with Jenson Button. I'm a massive F1 fan and had a little bit of a man crush on Jenson. My wife has too, so that's ok.

12. What do you think the long-term future holds for marketing agencies?

Super-long term is very disrupted. The body is the battle ground, not the screen. Screens will become obsolete when we start bypassing the eyes and delivering visual data, emotions, smells, sounds and tastes directly to the brain. Too far?

13. What are your predictions for the industry in the next 12 months?

Wearables are still going strong but the Apple Watch, as ever, will make ad agencies take notice as a new, super-personal medium to exploit. Location-based and more geo-targeted advertising is a must. The technology is out there. People will figure out that Oculus Rift VR can only be viewed by one punter at a time and Google Cardboard is a much better bet. We will see some ham-fisted attempts at VR. Be warned. HTML5 ads are really cracking along at a pace but we have to be careful we don't get forced down a templated route. And properly targeted, behavioural advertising will be key. We're writing client briefs these days where the main KPI is the setting of a retargeting cookie. It's not the ad itself anymore; it's about behaviours before and after someone has visited you.

14. How do marketing agencies in the UK compare to the rest of the world?

They’re still the best in the world, obviously. Although Australia is really lighting up in terms of innovation and quirky, award-winning projects at the moment.

15. What have been the key changes in the last three years?

It's hard for me to say and I'm relatively new to this world in its purest sense, but the biggest change to the TV ad agency world is just how powerful social and digital are when used effectively. There isn’t really anywhere to hide for above-the-line agencies that don't embrace digital. A constant shift to non-linear video consumption is important too, especially YouTube as a hub and Facebook's fight back with its native video format. And finally, the constant barrage of new social platforms. Investing a client's campaign budget in the latest platforms can be a little like backing a horse sometimes. You have to live and invest in all the latest digital platforms, you can't just put a TV ad on YouTube and pretend that's your digital strategy sorted.

16. Tell us something about you that no one else knows?

I have 3 nipples. It's not as impressive as it sounds though.

A helicopter, gin and tonic.

In the whole wide world? It has to be my step-dad Chris for looking after my mum who has MS.

19. What superpower would you have and why?

An empathy ray. I'd zap everyone in the entire world with it. The world could really benefit from a good dose of empathy at the moment.
Are you looking to take the next step in your digital career? Want to join an agency like WCRS? Or are you looking to hire top digital talent like Dino? Contact Katie Self, manager at Michael Page Digital for a confidential discussion.
T: +44 2072 69 2424
E: [email protected]